The difficult art of conversation

The latest discussion about organs taken from deceased donors that swept through the Polish media in mid-July 2014 showed that the explanation of the essence of brain death is very problematic. It's not easy to accept the death of a loved one. The first natural instinct is to reject all unfortunate informations. Medical experts, guided by the knowledge and rules in conversations with the families of potential donors of organs for transplantation, use specialized terms that are difficult to understand to the layman.

You cannot agree to something you do not want. You cannot accept what you do not understand. Today everyone checks each message from the field of medicine on the Internet. What does Dr. Google say on behalf of the Polish institution coordinating organ transplantation? Here's the official answer:

The cessation of blood circulation in the brain causes irreversible damage and although using special equipment can maintain the heart activity and breathing for some time, giving a semblance of life, it is evident that the patient is dead. In these cases the medical commission consisting of three physicians, including at least one specialist in the field of anesthesiology and intensive care, and one expert in the field of neurology or neurosurgery, following a series of tests confirm death and decides to disconnect the apparatus ventilating and supporting blood circulation. (http://www.poltransplant.org.pl/QA.html, date of access 25.07.2014). 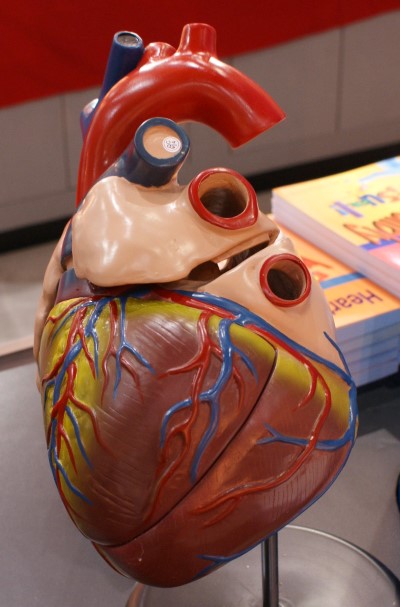 Aren’t they accidentally mistaken about their diagnosis of brain death? – thinks the family of a patient with polytrauma.

Media and critics of the term brain death fuel this uncertainty. It begins with a public show at the border of life and death. Accounts in social media are created to disparage the judgment and knowledge of physicians. Time passes. The devices supporting breathing and circulation are disconnected. No one wins.

The common meaning of death is the moment when breathing and circulation cease. In the imagination of the average person the brain plays no role in the process of dying. The concept of brain coma hinders the understanding of the matter. For the average person "brain in a coma" or "brain dead due to death" are states impossible to distinguish with the naked eye and for the mind to grasp.

Widespread distrust of the Polish society to transplantation is reflected in figures – in the first half of 2014 organs from only 290 deceased donors were obtained for transplantation. Throughout 2013 there were 594 of such donors in Poland. (http://www.poltransplant.org.pl/statystyka_2013.html).

The attitude of distrust towards the proposal of transplantation is also present in potential donors unrelated to the patient awaiting a transplant. In 2013 only 18 living donors decided to donate a portion of liver and 57 people to donate one kidney. The total number of people waiting for a transplant organ in Poland is around 1500. We need many times more organs for transplants than we obtain.

In the European Union* there are considerable differences in the number of donors per million of population (pmp). The best results are observed in Spain – 34.6 pmp, and France – 21 pmp. In Poland, the figure is 14.7 pmp; 13.8 pmp in the UK. Greece and Romania have a very low rate – 6.0 pmp and 0.5 pmp respectively.

Due to the high need for organs for transplantation, the European Commission launches various activities. One of them is the proposal to introduce an organ donor card which would facilitate the decision-making process of organ acquisition. Donation and organ transplantation celebration days are organized in different EU member states, during which the citizens receive information about this medical discipline. Educational activities are undertaken by medical journalists who participate in educational workshops in the field of transplantation organized annually by the European Union. All of these efforts result in some positive changes in the attitudes and behaviour of people, but this process is not progressing quickly. What is the essence of the problem then?

Each topic can be explained in three steps. Sophisticated imaging methods confirming cessation of cerebral circulation using digital angiography are not legible for average people. The message must be simple, illustrative, it may be helpful to refer to commonly understood analogy. A sample conversation could be as follows:

Today, the statement of death is made on the basis of the diagnosis of brain death. What does it mean? What is the difference between brain death and coma? Is it really that brain death is an irreversible state? Let us imagine a situation when the brain is working. We all know the saying – I had a light-bulb moment. We can say that the symbol of the working brain is a shining light bulb. If this light bulb is on, it means that the brain is working. As a result, this light causes that heart, lungs, and all other organs to work. 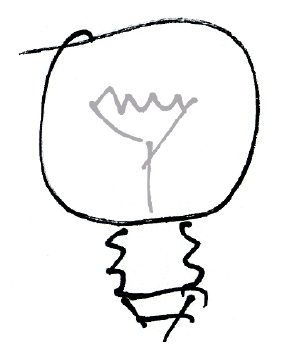 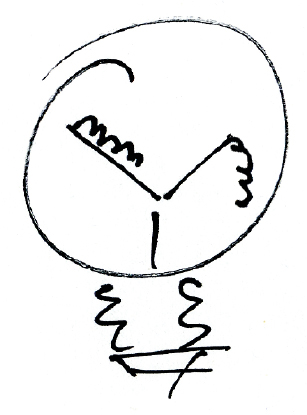 The situation is quite different when the light bulb which is the symbol of the brain burns out irreversibly. In such a situation, the brain is not working, the light bulb is not shining. And along with the light bulb all other organs go off. Some of them can be spurred to action for a short period of time by machines – a ventilator can stimulate the lungs to breathe, the drugs can stimulate the heart to beat. We cannot however stimulate the brain which died as we cannot illuminate the surrounding with a burnt out light bulb. Its work has ceased. The circuits which cause it to shine do not work anymore.

Simple drawings are helpful in explaining complex phenomena, but not everyone can draw nicely. We do not always have colored markers and a piece of paper at hand. But we always have a mobile phone. What is needed is a mobile phone application with a short film that would allow people to understand and distinguish between the states of life, coma and brain death by analogy to the light bulb.** 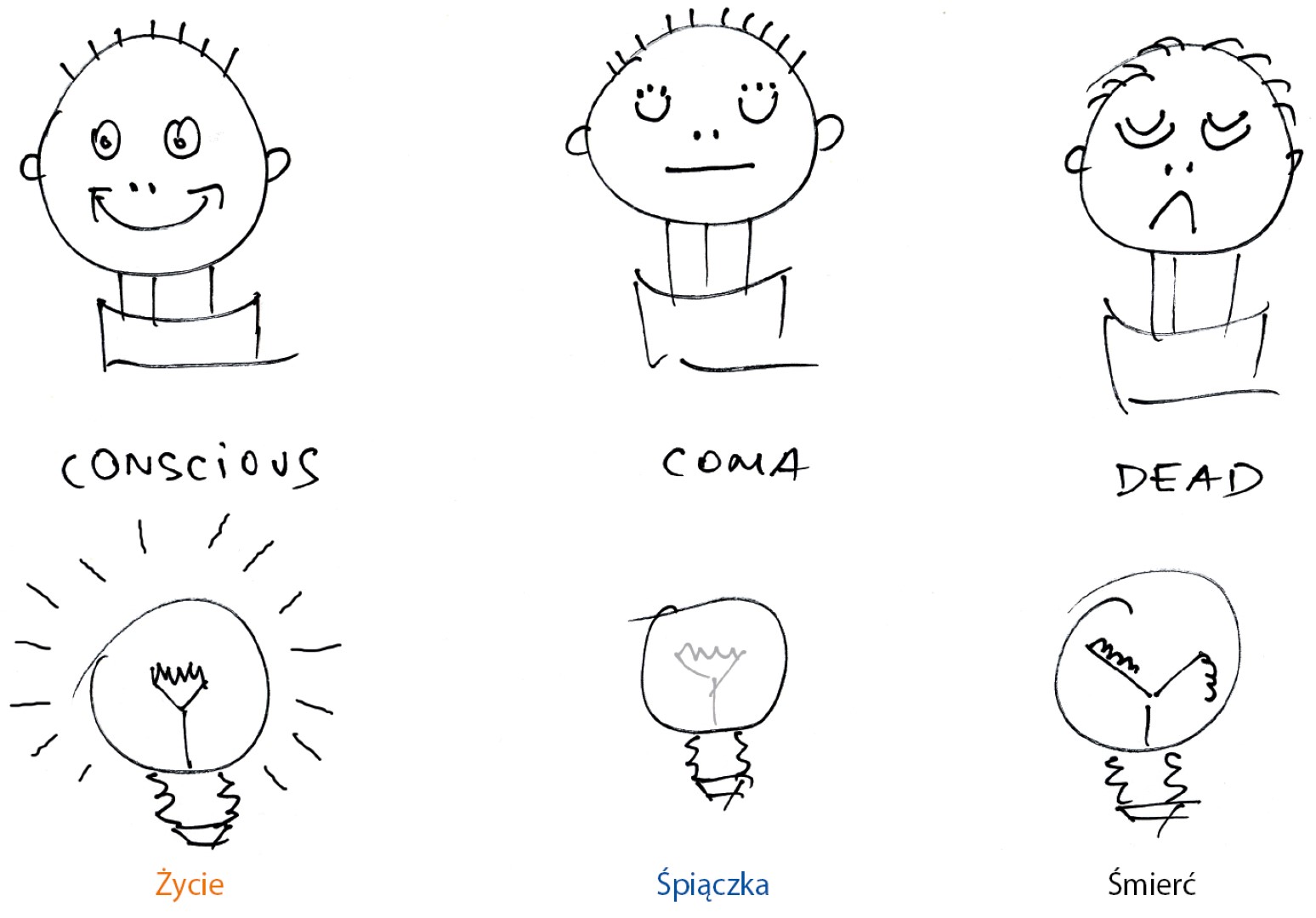 Without the understanding of the phenomenon of brain death we can never count on someone’s conscious decision, especially when the stake is the consent for organ donation for transplantation.

*European Context
The disproportion between the demand for organs for transplantation among recipients and the actual results of organ harvesting occurs in most European countries. Although since 2003 the European Union has successfully completed about 50 projects concerning transplantation, the problem of too low organ donation is still persistent. You cannot determine a real time perspective, when the stem cells will be able to grow new organs, which is why we need to improve existing methods of obtaining them.
Thanks to the EU projects we have standards for collection methodology and transplantation of organs, there are national registers of people waiting for a transplant, we know the rules of organ translocation, and care for living donors. The list of problems solved by the Executive Agency for Health and Consumers (EAHC) is long. However, there are still many problems to be solved by the EAHC successor, i.e. the Consumers Health and Food Executive Agency (Chafea).